latest news from 50 college coalition for sdgs https://opensocietyuniversitynetwork.org/ events next past
what do sdg-youth want to learn from & celebrate actionably with new york & UN & nature's borderless goals for human wellbeing? tours 10

ecommerce for example as 21st c world biggest market makers both bezos and j.ma started asking the same question in 1995 -

sequentially, they mapped very different answers for what ecommerce could be

ma was also the leading dual language teacher of his generation, curious about the whole world while bezos had no such cultural or lives matter raison d'etre- when you're 90 day reporting to wall street you dont have time to think outside the box even when 7.5 billion peoples lives may be impacted

j.ma chose to design algorithms around the data of local and global delivery -when it comes to a nation or region you love, whose 25 years of ecommerce celebrations values lives matter most?

when you value a quarter a century more than quarter of a year,  the exponential consequences of what tech multiplied can be extraordinary- according to because moore's law -which silicon valley was branded around eg by leland stanford junio alumni since 1972,  after compounding 100 quarters of a year, you can expect brings 30000+ more analytic intel than eg bezos started up with in seattle 1995

eg today china can ship and do a virus test for anyone anywhere in china within 36 hours for less than 5 dollars usa cant ship and do a virus test for less than 100 dollars and in under 10 days- its not bezos fault but he privatised 90-day profit-making the data platform and ai -whereas jack m's market mapsa were linked in for equality with 1.5 billion people in china and anyone/anywhere his friends including ai wizards whom jerry yang searched around stanford and masa son connected out of tokyo

LSJ was the only child of Governor of California Leland Stanford and his wife Jane Stanford (née Lathrop). His mother was 39 years old when he was born, after 18 years of childless marriage to Leland Stanford.

Leland caught typhoid two months before his 16th birthday, while on a Grand Tour of Europe with his parents. He originally fell ill in Athens. His parents rushed him to Italy for medical treatment, first to Naples, then to Rome, and eventually to Florence, where he died after weeks of alternately improving and worsening condition.[2]

Leland Stanford Sr. told his wife that "the children of California shall be our children."[3][4][5] To honor their son upon returning to the United States, the Stanfords devoted their fortune to a memorial in his name: Leland Stanford Junior University. The university opened its doors in 1891.
Leland Stanford Jr. is interred beside his parents at the Stanford family mausoleum on the Stanford campus. After the death of his father on June 21, 1893, his mother guided the development of the university until her murder on February 28, 1905.

FAZLE ABED IS CELEBRATED FOR HALF A CENTURY OF HELPING HALF A BILLION VILLAGE WOMEN END POVERTY- HE IS LESS WELL KNOWN FOR STARTING UP THE COALITION OF 21ST C NEW UNI
-THE FIRST WOMAN TO SUPPORT HIS IDEA : SHEIKHA MOZA FIRST LADY OF QATAR
Posted by chris macrae at 7:23 AM No comments: 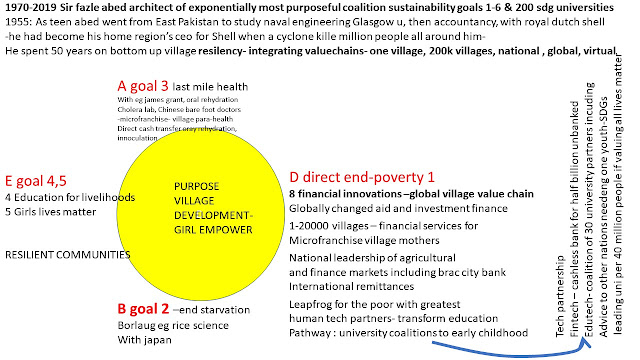 50.00 Usually when the Chinese ambassador to Bangladesh calls me he is looking for ideas on poverty alleviation, but back in 2011 I suddenly got a call asking me about a different sort of noble project : did I have ideas on how china could avoid the middle income trap – it turned out the economist had just done a survey on that https://www.economist.com/special-report/2011/06/25/beware-the-middle-income-trap Do you have ideas about things that we (China) can do to avoid the middle income trap?
51:05 I said off the cuff I'll tell you one or two things that I think will be important for you to do to avoid middle income trap because the two countries that have become high-income countries in our region during the last thirty years are Singapore and Korea
and what have they done that peer countries in the region didn't do, I can see only two things
51:39 one thing singapore built a very high quality university designed to be the powerhouse of creating jobs, and enterprise innovation all kinds of things like that… so did korea…so if you want to build China as a high income country for one fifth of the human race, then you have to build a dozen Oxfords, dozen Cambridges dozen Harvard/MIT and dozen Stanford
do that and then you China can build a high income Society
52:22 And the ambassador said why is this? so I said well it's because in order to build these
universities you need to endow them well and you have to give complete freedom to and for the intellect- intellectual freedom will mean no controls of state – you will have to forego that -- you can't you can't get the faculty to think only on what the party line is
52:56
the other thing is that they must be self-governing institutions -universities : if you can build that then you will have a high income Society- if you can’t then you fail
Posted by chris macrae at 9:46 AM No comments:

among alunnii circles of 2020s, professor jan kregel at the levy institute of bard links the most inspiring economist circles since the death of

those who financed the first 185 years of this did the opposite of adam smith's principles embedding slavery, genocide and lang grabbing that climaxed in 2 world wars

humans had another chane to unite nations when over 75 national leaders met at san francisco opera house 1945- in 2020 we get arguably one last chance to design economcs in which all lives matter- sustaining las mil health , restoring climate and love of each others childrens if we want to use tech so that the younger half become the first sdg generation

if you know anyone as connected as jan levy scholar networks in valuing youth's futures we would love to know whom to study chris.macrae@yahoo.co.uk WWW.ENTREPRENEURIALREVOLUTION.CITY year 60 of humanising tech dialogues started at the economist
a norman macrae family foundation search co-sponsors of glasgow's journal of new economics in search of deep data for societal business
Posted by chris macrae at 11:15 AM No comments:

the greeks literally could have imagined the challenges 7.5 billion people unite roind today if  we are to humanise artificial intel

nore recently 80 and 260 years ago
both keynes and adam smith were very clear about machine age development of peoples- when young people and their teachers are skilled in how economics and arts determine what futures can be hubbed communally they can triangularise a live-saving 3rd skill -be that health, resilient community-building, ... public servant leadersnot political supreme being..

we were lucky to visit bangladesh 15 times to listen to sir fazle's legacy wishes- among the worlds largest ngo coalition he asked all those who had learnt most about golls 1 to 6 from him to design a global university of poverty in which any youth committed to life matter could graduate without debt- his last video to the world made it clear that uniting nations to help women end poverty woulnt happen until the safety of cities is based on deep data of 9 year old girls feedback (what was once called the popsice economic index in usa) and until arts spread joy out of even those communities whose hard work saved us all from the edge of extinction- mother nature is very tough on species who fail to understand her games are borderless not walled in; arts can translate beauthy across cultures -the east's consciousness movements start from this p-rinciple; the west golden rule constitutions exclude this foundation
Posted by chris macrae at 4:37 AM No comments:

Posted by chris macrae at 4:55 AM No comments: 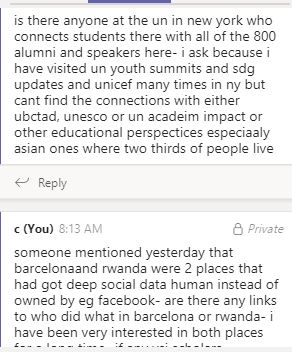 Posted by chris macrae at 5:16 AM No comments: