what would humanity miss if XXX did not exist? I published this new economics/valuation genre "Chartering"  with The Economist Intel Unit while working at the globalisation consultancy of one of the big 5 accountants 1995. Of all the leaders purposes journalists and researchers have chartered in last quarter of century, I value that of Fazle Abed most.
As discussed here, Fazle's purpose devoted 5 decades 1970s through 010s -  helping a billion poorest women map up to 30 collaboration networks resolving life critical challenges .
chris.macrae@yahoo.co.uk washington dc and glasgow university union
If lives are falling apart in your community I can try and help you search which 4 of 30 abed networks you need. At its simplest communities need hi-trust actionable advice/societal action networking on health, education, finance, engineering. They need this advice to have intergenerational consistency for at least 25 years. That's HERSTORY now evidenced by a billion village women!.
FUTURE Now: if my friends maths models since 1984 are correct -we somehow need to apply tech to deep community data everywhere that children are born and co-create first sustainability generation by 2030.
chris macrae short bio- the future of university became an amateur passion after my first job at uk national dev project computer assisted learning university of leeds; i never earned more than a masters in statistics from cambridge's' DAMTP 1973; from 1976 i helped the worlds biggest western companies collect data needed for innovation but from 1990 i became more interested in unique purpose of leaders- co-research with my father (The Economist's Norman Macrae) on 2 books including biography of john von neumann has made our main scientific hypothesis since 1984 that the human race's extinction battle with nature must be collaboratively resolved in 2020s - the most exciting time to be alive and celebrate fellow human beings
>related knowhow -at normanmacrae.net 15 years of survey on Asia rising 1962-1977 including 2 new economic models rural keynesianism and japan/korea/taiwans CAPITAL coastal belt roadsters redesigning value chains of engineers as borderless sme networks and supercity infrastructures; 60 years of tech entrepreneurial revolution inspired by being biographer of what von neumann expected 100 times "moore" tech would be used to unite humans by 2020s please rsvp chris.macrae@yahoo.co.uk Glasgow & Washington DCx . 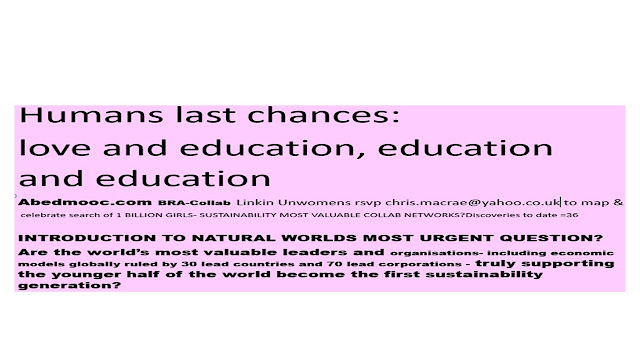 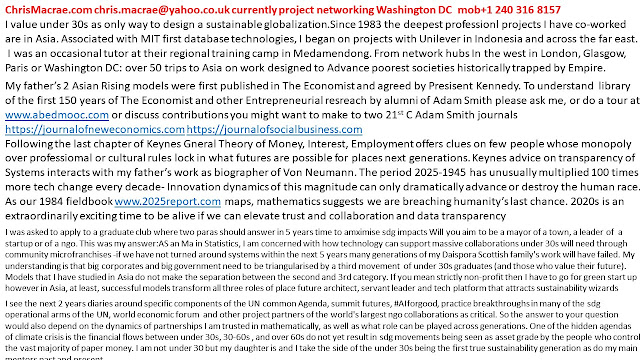